Manuelito is a grade-school boy from a rural Mayan village in the highlands of Guatemala. His community was rife with violence from various groups including the armed civil patrol (PACs, in Spanish), Maras (gangs), and drug dealers. This story portrays the reality of illegal immigration as a consequence of widespread violence, poverty, and drug trafficking. Manuelito’s school closed and with nowhere else to go and nothing else to do at his age, his family decided to send him to the US to live with his aunt.

After days of traveling, both with and without the assistance of a coyote (people smuggler), he was able to traverse the perilous journey from his village to arrive miraculously in Long Island, NY. He took buses, endured days of traveling with strangers, crossed/swam rivers to get across, and walked for miles just to arrive at his destination.

He was separated from his close friend, Coco Loco and were not afforded the truth to his friend’s demise. Time and again, he wondered where his friend could have gone, if he were taken back to Guatemala, sold to gang members, or worse… He had also encountered other individuals who had stories as tragic as his; rape victims or runaways from identical types of violence.

Nonetheless, the story ending was depressing. Despite having reached his destination and were finally living in an ideal world with his aunt, he had to face the harsh truth that US authorities were in constant search of undocumented immigrants to send back to their originating countries.

I liked the book cover. At first glance, I saw an innocent boy who had a story to share. It seemed auspicious based on other things such as the two boys running together on the bottom of the spread, men on the background who might be working at their farms, and a peaceful village behind them. Alas, it is a lie and quite the opposite is true.

Manuelito’s story may be that of just one person but it is similar to the hundreds of thousands of people, including unaccompanied minors, who cross the US borders on an annual basis. We get slight glimpses of his journey from his Mayan village to Long Island, succinct and to the point; graphics that are accompanied by short descriptions.

The advanced review copy (ARC) had blurry images, some drawings were indistinguishable even. The illustrations seemed like they were outlines and were drawn over images. The stories and descriptions were written in ALL CAPS! I don’t think I’ve ever read a book (or most of it) that was written in all capital letters. There were more than enough instances of bad grammar and incomplete sentences (or no sentence structures). The dialogue bubbles could also have been structured and arranged better for me to be able to follow along with the conversations.

Unfortunately, this story needed more depth to be memorable in my opinion. It is very timely to what crisis the US is facing on its borders but this graphic novel did not successfully embody that crisis and failed to execute a more affecting storytelling.

Images copyright: Elisa Amado and Annick Press Ltd. I was provided a free copy of this book via NetGalley in exchange for an honest review. #Manuelito #NetGalley

This is a very poignant story, a story of a little girl asking her grandfather how to say a certain word in his Cree language. However, he is saddened because he does not remember his language, it has been stolen from him as a young boy. This story introduces to young readers the brutality of Native Canadian history, though in a profoundly artistic way, of their residential school system which was created for “the purpose of removing Indigenous children from the influence of their own culture and assimilating them into the dominant Canadian culture, ‘to kill the indian in the child’” (Wikipedia). 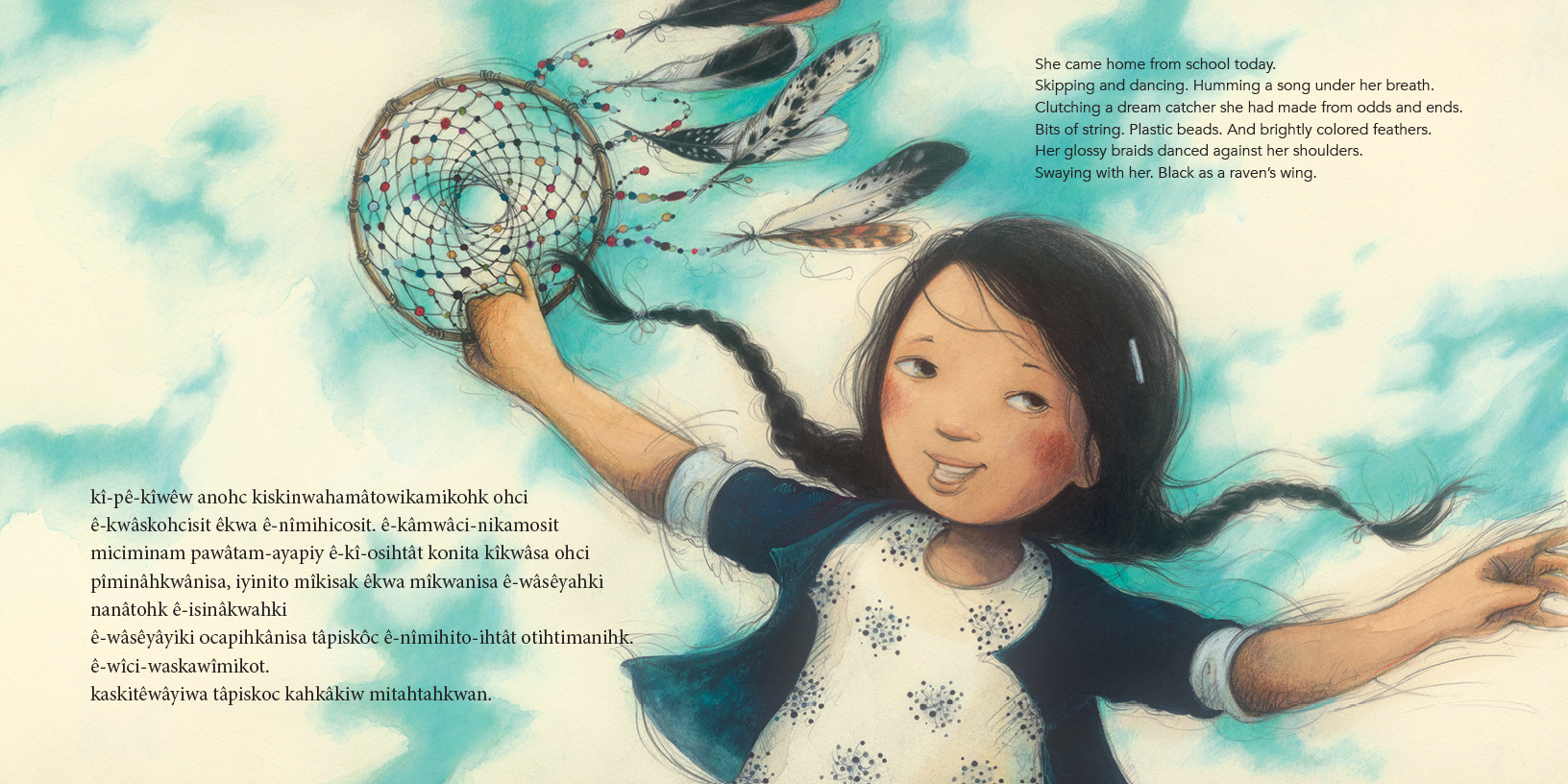 “Clutching a dream catcher she had made from odds and ends.” 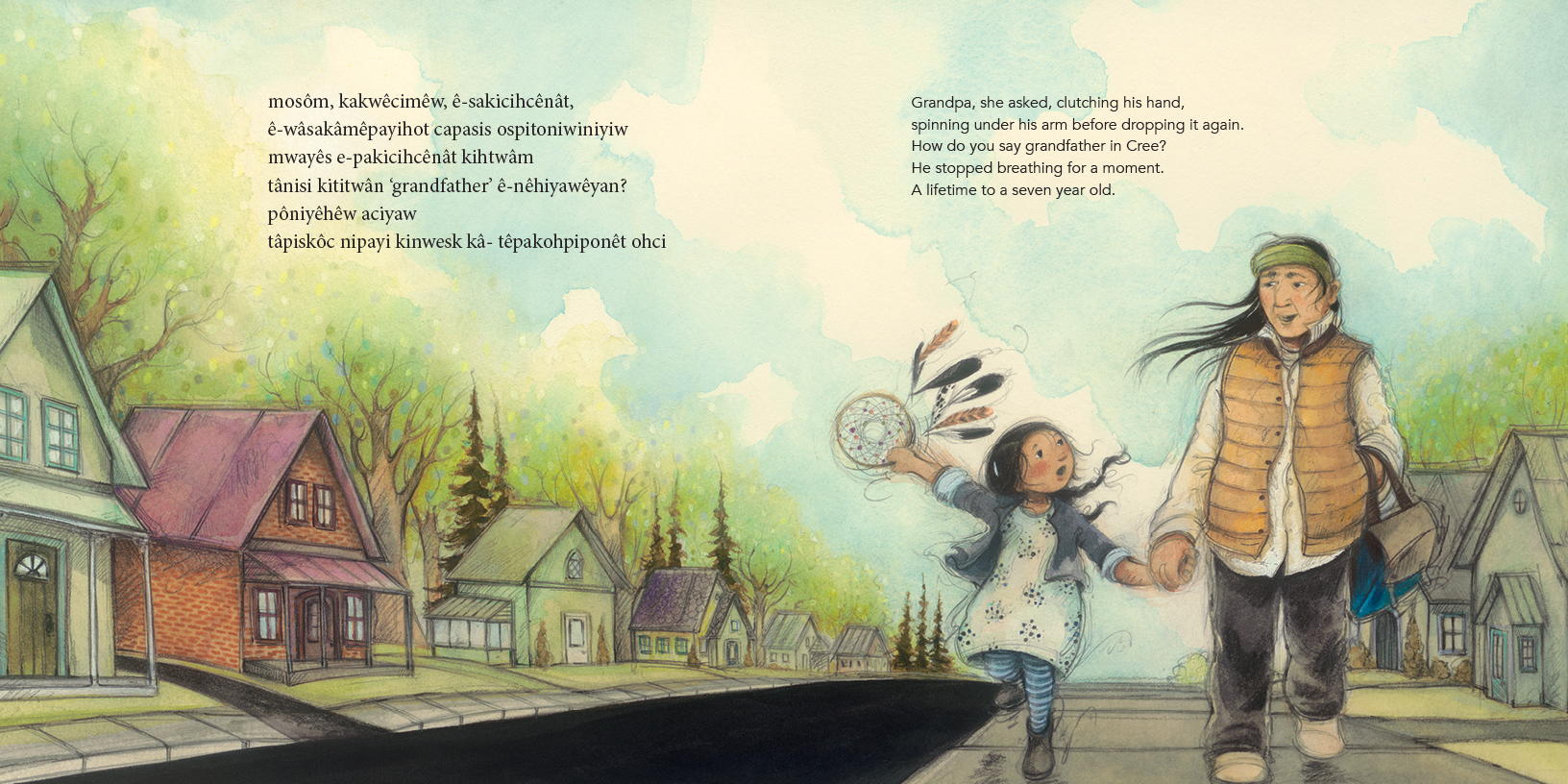 “How do you say ‘grandfather’ in Cree?”

The story and the artwork/illustrations blend harmoniously to create this beautiful yet emotional tale. The story takes you into an emotional roller-coaster ride from a happy, care-free day after school, to an anguishing moment when the grandfather retells his story of younger days. The most haunting image depicts sad, young Cree boys in residential school having their words taken away from them portrayed as a bird flying out of their mouths and it being locked up in a cage by the white man.

The little girl comforted her grandfather by giving him the dreamcatcher that she had made and presenting him with a gift the next day. She gave him a book, a book that consisted of the words he had lost. As he turned the pages, he whispered the words and they “felt familiar in his mouth.” And, as though they have been imprisoned within the pages, the words broke free from their cage as he uttered them once again.

I loved this book. I love books that are bilingual in that they tell the same story in two different languages. In the United States, we can learn something from this narrative. Where, with at least 350 languages are spoken (U.S. Census Bureau, 2015), I believe that it is important to integrate these languages in our schools and our daily lives, especially in children’s books, because they tell the story of our cultures and the history of how we became a nation presently.

Images copyright: Melanie Florence and Gabrielle Grimard, Second Story Press. I was provided a free copy of this book via NetGalley in exchange for an honest review. #KimotināniwiwItwêwinaStolenWords #NetGalley

I was intrigued when I saw Shing Yin Khor’s book about the “American Dream” and, although it was her interpretation of her American Dream, I was absorbed by the illustrations and the promising content.

I want to start with the illustrations. I am also an illustrator and an artist myself (although, not very good) so I do appreciate looking at the nicely done watercolor illustrations and visual contents. I especially love the two-page spreads of landscape illustrations of Owl Canyon, AZ, and Blue Mesa at the Petrified Forest National Park. I love the contrasting color schemes used on the sunset, dusk, the expanse of the landscape, and a few sprinkles of stars in the darkening sky. I liked how she used movements on the paintings to convey people’s (and animals’) expressions and feelings. I like the color scheme overall.

In the beginning, the author described how she longed to understand the concept of the American Dream and hoped to achieve this by undertaking a road trip with her dog, along the historic Route 66. To her, the forgotten era of “tacky roadside attractions, and tiny abandoned towns, and little diners and motels” were the characterization of America “more than anything else.” She had lived in Los Angeles for a number of years and wanted to explore the “real America.” She met people, both friends and strangers in different towns and cities, who aided her in her journey with her quest.

She liked using peculiar words such as “kitsch” and “outsiderness” and, as another reviewer had stated, the writing style may be more suitable for younger readers. Her attention to detail is apparent, however, it can be improved. For instance, the map of the U.S. did not match her state maps–Chicago is by the water and not landlocked (pp 10-11). I couldn’t actually tell if her dog, Bug was a girl or a boy. She referred to the dog as “she/her” but female dogs don’t normally raise their hind leg to pee 😉

In a sense, I somewhat relate to her story. I too am an immigrant to the U.S. but we have two different interpretations of what embodies the American dream.

Towards the end, and halfway through her journey, she had become exhausted and “skeptical that the American dream still existed” but remained hopeful of its potential, just like the deserted waterpark she was sitting on at the time. She may have finally realized that her journey had become ineffectual, as I have also felt the same while getting closer to the end of the book. Her last half of the trip (from Texas to Illinois) seemed rushed compared to the beginning, where she spent almost a quarter of her time mostly in Arizona. By the end, she felt unaccomplished by taking the long road trip. I also felt unfulfilled after going through the rest of the book.

I think that the book title The American Dream? depicts its content precisely, in that she was left uncertain of her purpose in taking this journey (hence having a question mark.) I give this book 3.5 (out of 5) stars.

I cannot help but compare Khor’s memoir with another recently published book with (almost) the same title, I Was Their American Dream by Malika Gharib. I highly recommend Gharib’s book, where she also described her upbringings in a multi-ethnic and multi-religious household and community, and how she had managed to get to where she is now. Read my review to I Was Their American Dream.

Image copyright: Shing Yin Khor’s Portfolio, sawdustbear.com. I was provided a free copy of this book via NetGalley in exchange for an honest review.

I Was Their American Dream: A Graphic Memoir

I first learned about Gharib’s I Was Their American Dream on social media then shortly after, I saw it at a local book fair so I had to get it!

This graphic memoir explored significant topics about race and diversity that many of us in America constantly experience. It conveyed something that was familiar to me and yet so unique. Stories like this that are diverse on religion, culture, and nationality topics are rarely seen. Unless I search for them on the Internet and forgotten bookshelves at the library, I don’t get to see stories that I can relate to or read about. More importantly, it was portrayed in a creative way and on a “trendy” medium such as a graphic novel, so I was very excited to have found this book.

This book is quite relevant to me on many levels having immigrated to the United States when I was a teenager. I have certainly been “whitewashed” after having moved away from home at an early age. It is a continuous struggle for me to try and connect with my heritage and I could empathize with many of the instances mentioned in this book. The questions Gharib were asked as a high school student, “What are you?” was a reminder to when I was intermingled with other military service members. Having served in the military, I was exposed to many different types of racial backgrounds and nationalities. Questions such as “What are you?” and “Where are you from?” were more common than having asked, “What’s your name?”

Finally, the illustrations and graphics are unpretentious. I like the simplicity of it which supplemented to the great storytelling instead of inundating it with more unnecessary details. As one reader had pointed out, Gharib had used the colors red, white, and blue extensively to represent her American culture among the amalgamation of other events in her life. It’s like she’s telling us that with all the pages in the chapters of her life, they paint the colors that make her a true American.

The one thing that I regret was not knowing that Gharib herself was at the book fair, and it would have been cool to get her autograph my copy 🙂

If you want to get answers and information about any of my work, services offered, or simply want to know more about me, get in touch!